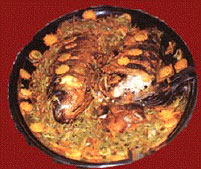 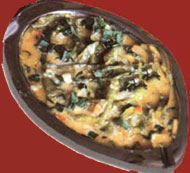 Most of the good restaurants in Bhutan are located in the hotels only. Buffet is the preferable way of eating in these restaurants.


The staple food of Bhutanese is rice and vegetables with abundant chillies. Spicy chilies mixed with a cheese sauce called emadatse are the national dish of Bhutan. Chilies are treated as a vegetable rather than a seasoning in the Bhutanese diet. A wide variety of fresh vegetables are a daily part of the Bhutanese diet. Red and white rice are served at all meals. Meats, poultry and fish are also found on many Bhutanese menus along with Tibetan momos and noodle dishes. Bhutan's professional chefs temper their natural tendency to over spice dishes by preparing food more suitable to western taste ranging from Continental to Chinese. Bhutanese, Tibetan and Indian cuisines are also available. Pork fat is popular in the wilds because of its high energy content - visitors find it almost inedible because it's usually stale.

The Bhutanese also eat a variety of vegetables, including potatoes, fern, spinach, cabbage, cauliflower, and onions. These vegetables are often cooked with a small bit of fresh cheese. In central Bhutan, buckwheat is the main staple because the altitude is too high to grow rice. The Bumthang region is known for its buckwheat pancakes and noodles. Common beverages in Bhutan include butter tea (suja) and ara, which is a spirit distilled from rice, wheat, or corn.